Almain is a playable race in Kingdoms of Amalur: Reckoning.

The Almain are valorous humans who embody the ideal of Order in all things. They abhor chaos, imposing structure and ritual in everything they do. One of the most imperialistic kingdoms in Amalur, the Almain are proud of their long and illustrious military tradition. Their patron deity is Mitharu, god of Order, a belief that guides every aspect of their lives.

Some Almain have come to The Faelands seeking freedom from the binding ties of politics and religion, hoping to make their own destiny far from the rigid laws of their kingdom. Yet no matter how far they may wander from their homeland, they honor the battlefield disciplines of their ancestors.

The Almain, culturally & traditionally, encompass essentially all mankind and, unlike the Ljosalfar and Dokkalfar, can greatly vary in appearance from those with snow white skin to those with dark brown skin. In addition, facial features can vary but despite these significant aesthetic differences, humankind is held together by a common culture and physiology that is distinctly human.

"We must strive to uphold valor, order, and law - to be the beacon of hope that inspires all of Amalur." -King Vangoldt the Great, at the Liberation of Myria

The Almain are a warlike and religious nation of a storied origin. Many Almain come to the Faelands seeking freedom, while honouring the traditions of their homeland.

The king or queen of the Almain rules for life, advised by a council of nobles. Members of the nobility carefully compete for opportunities that will bring them closer to the throne. Heads of the Almain noble houses and regional governors appointed by the king oversee smaller cities and provinces. Those eligible for highly profitable governorships contend fiercely for appointments.

The Archon of Order, leader of the Temple of Mitharu, plays a powerful role in Almain society, complementing the political leadership of the monarchy through most of Almain history. Bishops of the Mitharan Order choose the Archon, though sometimes popular sentiment guides their decision.

The Almain are builders, generally preferring to live in clusters which grow into towns and cities. They raise children with stories of the days when their isolated ancestors faced incursion by gnolls and other threats … the days when impudent sons and daughters were carried away into the night by horrible monsters before they banded together under the protection of the heroic Almere the Bold. To the Almain, strength comes in numbers.

Their largest cities—Port Myria and especially Valiance—embody the pride of the Almain. Promoted as exemplars of their innovative and industrious spirit, their cities are centers of civility and commerce. Even the poorest citizens understand their responsibility: to make their own homes orderly, well-maintained places worthy of the greatest kingdom of Amalur.

Believing strongly in the principles of order and law, the Almain spread this enlightenment to the far corners of Amalur. They have established villages and outposts in distant lands and hostile territories, determined to bring the teachings of Mitharu to those they see as lost in chaos. Though not everyone in Amalur appreciates Almain expansionism, even their enemies and detractors must admit a grudging respect for the humans' tenacity and determination.

In Almain society, one's social standing and family profession heavily influence one's career. Soldiering in the army or navy is a common vocation, and the rich and fertile lands near both Port Myria and Valiance make agriculture a key industry. While capable of producing most commodities themselves, the Almain trade their abundance of crops with other kingdoms for valuable goods, such as Apotharni glass and Massariol wine.

Through the first half of Amalur's known history, humans appeared to be the most mundane of races, only capable of using magic when distilled into a physical form such as enchanted artifacts, alchemical potions, or spell scrolls. During the Age of Arcana, humans became capable of directly controlling magic, eventually possessing a tactical use of magic on par with more magical races. This marked a huge shift in the balance of power in the world, and magic began to dominate the religious and scholarly aspects of Almain culture.

The Almain respect the arcane arts when practiced in a structured manner, but tend to eschew uncivilized, primitive forms of magic. They founded the Royal Academy for scholarly study of thaumaturgy, while the sorcerers of House Ahn'Vas would come to control darker forces.

The patron god of the kingdom is Mitharu, Lord of Order. The Almain invoke the name of Mitharu wherever order is imposed and believe in the concept of Mitharu overcoming chaos to bring structured civilization to a troubled world. They are servants doing his noble work—whenever founding a new colony, one of the first buildings they construct is a temple to Mitharu.

Despite the influence of Mitharu, the Almain are free to follow any deity they choose. Almain sailors and merchants are known to give prayers toNjordir, god of the sea, in hopes of a safe voyage. Reverence for Ethene, patron goddess of the Kollossae, has spread among Almain living inAlmere Valley from neighboring Othyris. And Almain soldiers marching onto the field of battle would never forget to ask for the blessing of Thyrdon, god of war, even as the Jottun opposing them do the same.

The precise origins of humankind are the subject of debate among historians and theologians, but the Almain cite an early civilization called the Mitharans as ancestors. The Mitharans were a kingdom of humans guided by the Erathi, magical beings who personified the influence of order. When the Erathi left the mortal realm, the Mitharans attempted to hold together all that the Erathi had established. But the empire soon splintered apart, dividing into rival factions, leaving behind only segments of a vast tome called the Codex of Order as a foundation for future civilizations.

The human clans dispersed throughout Amalur, founding small, independent villages. Those who settled in the elven lands of Alfaria were forced to unite under the banner of the Durek, a tribe of fierce warlords who ruthlessly conquered their rivals. Fueled with relentless and foolish ambition, the Durek attacked the armies of the Alfar, leading to a costly war and crushing defeat at the hands of the elves. While the remaining Durek were exiled, the peaceful human tribes who had been enslaved by the Durek were allowed to remain in Alfaria under the stewardship of the elves.

Rise of The Almain[edit | edit source]

By the era of the Middle Kingdoms, numerous human tribes had established villages and homesteads throughout eastern Alfaria. Over time, the growing population of humans came into conflict with tribes of gnolls who also inhabited the region. The gnolls, under the command of their leader Cynoc, pushed back against the human incursion. The gnolls found remarkable success against the humans, who lacked a strong leader.

After years of suffering, a warrior named Balforth Almere took initiative, building the local militia into a unified army that could stand against the gnolls. He fortified the villages and drafted soldiers to defend the roadways, using the small village of Port Myria as his base of operations.

Hardened by defending their lands, Almere's army began a campaign against Cynoc and his brood. Fighting for many bloody years, they succeeded at driving back the gnolls. Almere became a hero to the people, and though the leader was reluctant at first, he gave in to popular demand and was crowned King Almere the Bold in 1422 BE (1855 NW). In honor of his leadership, the people adopted the name Almain and continued to build a proud heritage of their own.

At the dawn of the Age of Arcana, a young student named Galvin Dulac became the first Almain to wield magic when he felt the power swell in his voice as he read from a dusty tome. Even though magical talent had long been considered impossible for a human, Dulac soon proved capable of performing advanced spells. At first, only a few examples of magically inclined humans were found, but gradually more and more surfaced among the great kingdoms.

By the time that the Crystal War enveloped the Faelands, humans such as the Almain and the less sophisticated Varani could manifest magical abilities. This shift in power bolstered the growing Almain kingdom, which was no longer reliant upon other races for magical weaponry and defenses.

However, the cultural shift resulting from this awakening of magical ability brought new challenges. Magically inclined nobles in the north began to resent the leadership of traditionalists in Port Myria. A struggle for power ensued, creating a political and philosophical schism that undermined the stability of the Almain kingdom.

Enlightenment and the Foundations of Order[edit | edit source]

Although they gained the ability to harness magic and increased their influence in the Age of Arcana, the Almain endured severe hardships in an era of blight and turmoil known as the Age of Ruin. Fighting bravely, their society nearly fractured in the battle against forces of darkness.

Chaos loosened its grip at last when the Kollossae joined forces with the Ljosalfar to assist the Almain. With their armies under the command of the astute Vangoldt the Great, the Almain helped usher Amalur into the Age of Enlightenment.

The Almain and their allies then formed the Concordance, an organization dedicated to order, valor, and mutual prosperity and defense. Immediately following the founding of the Concordance, the humans worked hard to reestablish themselves as one of Amalur's great kingdoms, enjoying a time of growth, learning, and development.

The Building of Valiance[edit | edit source]

In the later years of the Hyperian Age, King Valgoth IV of the Almain initiated an ambitious undertaking: the building of a beautiful, shining city set atop and within a massive dam. This city, called Valiance, would serve as the new capital of the Kingdom of Almere and seat of power for the Concordance.

The construction of Valiance started in 1068 AE (4344 NW) and continued for decades. Though the majority of the building was done by Almain labor, the other kingdoms of the Concordance provided assistance. The gnomes proved to be valuable contributors as well, offering architectural plans and building techniques that furthered the project. Costly in both resources and lives lost, the dangerous undertaking endured due to the sheer force of will of the Almain people.

Heart of the Concordance[edit | edit source]

When the Kollossae city of Pelios fell and the Hyperian Empire collapsed, the Almain found themselves bearing the majority of the Concordance's political, economic, and military burdens. Tensions rose further with the rise of the Amaranthine—a rival alliance formed by the great kingdoms of Fortenmar.

After Valiance was completed in 1141 AE (4417 NW), the longstanding war between the Almain and the Jottun plunged into new depths of brutality, threatening to drag their respective alliances into the fight. The main theaters of the war were in the Axelands and the Plains of Erathell, which became known as the Fatcrow Plains because the ground was black with the countless murders of crows feasting on the unburied dead.

During the Age of Heroes, the Concordance relied heavily on the vigilant leadership of the dutiful and devout Almain. 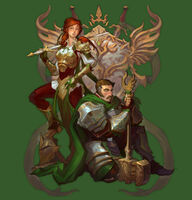 Almain as they were to appear in Project Copernicus

Retrieved from "https://amalur.fandom.com/wiki/Almain?oldid=78229"
Community content is available under CC-BY-SA unless otherwise noted.