“From the beginning, we were wrong. And only now, well into the second decade of the conflict, have we begun to understand the mistakes we have made.

We lived in harmony among the Fae, in a world awakened to new magic. Perhaps we should have foreseen what might be born on this rising tide. What force might awaken. A force powerful enough to twist even the eternal and immutable Fae folk.

But Gadflow, the new king of the Winter Court, surprised us all. Singular among his people, he was all that other Fae were not: aggressive, ambitious, visionary. He had power like none we had ever seen -- terrible and deadly.

Gadflow and his followers, the 'Tuatha Deohn', believed that a new god was to be born in the East, beneath Gadflow's crystalline fortress of Amethyn. In the name of that god, they marched to war against the young races of Amalur.

Against a mortal army, no matter the power of their god, we might have been victorious. But the Fae are creatures of magic, not bound by the laws of life and death. Each Tuatha fallen on the battlefield would soon rise again, for the Fae do not know death as we do. How could we stand against such a force?

For ten years, the war raged. For ten years, the armies of men and Alfar fought and died. But as our numbers dwindled, we knew that it was only a matter of time. Our fate had been written. At least, that is what we believed...

— Alyn Shir, as she narrates the intro to Kingdoms of Amalur: Reckoning

"Live your life the way you want to. Fate is a lie, but even if it isn't, there is no use fighting it." - Alyn Shir, describing something a friend of hers once said.

Diplomat, spy, or saboteur, few things are certain about the secretive Dokkalfar agent named Alyn Shir. Most know her as a charming and scandalous ambassador. The Alfar armies know her as a cunning and unpredictable ally. A rare few know her as a fearsome and merciless assassin—but never for long.

When asked, Alyn Shir is willing to spin any number of tales about her past. Sometimes, she is the least daughter of a minor noble, inheriting only a pair of ancient daggers and a disdain for those who think that power will protect them. In others, she was born a street urchin and survived through stealth and cunning. The only certainty is that as the war rages on, this singular woman has found more and more need for her knives, and no one can be certain where her true loyalty lies.

The mysterious Dokkalfar first appears in Arden's Hut standing over Arden's dead body. She claims to be following a Tuatha Deohn group who are also responsible for Arden's death and that she is familiar with the

Fateless One from before his/her death. When Agarth arrives on the scene, he immediately proclaims his suspicion of Alyn's intentions.

When the Fateless One arrives in Mel Senshir with General Tilera, Alyn is present and waiting for the upcoming battle. During the battle itself, Alyn briefly meets the Fateless One on the ramparts and the two destroy some Tuatha siege ladders before Alyn tells the Fateless One to continue on his/her mission to kill Balor.

After breaking the siege of Mel Senshir, Alyn disappears until she accompanies the Fateless One and Cydan in search of Ventrinio on Dannestar Isle. After the Fateless One finds Ventrinio and rescues him from Dannestar Tower, Alyn joins the Fateless One, Agarth, Cydan, and Ventrinio in Alabastra, where the group decides to split up to avoid detection and reconvene in Amaura. Alyn is paired with Ventrinio so Agarth, who still doesn't trust her, can keep track of her whereabouts.

When Agarth and Cydan meet up with the Fateless One at Amaura, Alyn and Ventrinio fail to show up. Agarth immediately proclaims that Alyn betrayed them. After the Fateless One kills Cur and gains entrance to Bhaile, Alyn is spotted in the courtyard, standing over the body of Ventrinio.

Alyn tells the Fateless One that they were both part of a secret organization dedicated to keeping Tirnoch secret from the world. If knowledge of Tirnoch became common information, too many people would be tempted by Tirnoch's power and Tirnoch would be able to escape her cage and destroy the world.

She also states that the Fateless One was an arrogant bastard and has changed significantly in his/her second life, and that it would be a waste to lose the person the Fateless One has become, hinting to a possible romance. This is further strengthened by the fact that after a successful persuasion attempt she says that she has "more important things to do than love".

She is first encountered in Arden's hut, but quickly departs.

Much later on, during The Great General, after she departs Emaire, she can again be found in the Summer Court along with Agarth, where she can be asked about the general again or, now, Urul-Tusk, depending on how far in the quest the player is.

“Interesting... you're not at all what I expected to find here.”

— upon first meeting Alyn Shir during Into the Light.

“I thought I'd find you here. If you were anyone else, I'd say it was destiny. But in this case, it was that damned tree. He's got roots and branches all through this forest. He said we should walk this path together. Thought I could help you, or maybe that you could help me.”

— upon arriving at Haxhi Dam during Old Friends, New Foes.

“Aren't I always? But have patience. For now, why not take comfort in knowing that you saved Nyralim and his forest?”

— if you choose the response: You're holding something back.

Upon completing The Coming Storm, after placing the Codex of Destiny

“Who would have thought you were so interesting? Death seems to have worked out very well for you. Agarth's looking for escape, Nyralim's looking for a savior, and Titarion is looking for a champion. And somehow... you're giving everyone what they want. I'm impressed.”

— upon completing The Coming Storm

“This won't be easy; the Tuatha have our forces under siege at Mel Senshir - and their power has only grown over the years. You'll need more help than just me and that old Fateweaver. You'll need an army.”

— if you choose the response: I need all the support I can get.

“A few years ago, a warrior could have slipped past unnoticed. But stealth is no longer an option. Not even for me. But there is hope - in the Plains of Erathell, there waits a player who has been away from this game for far too long... it is time to contact General Tilera. Meet me in the village of Emaire... and I will tell you everything.”

— when asked: How do we get to Gadflow?; begins The Great General quest

During The Great General

“General Tilera was in charge of our forces to the east, in Klurikon. But a decade ago, Witch Knight Malwyn and his Tuatha army drove her forces back. Since then, she's been looking for some way to take back the land she lost and regain her honor. You might be just the help she needs.”

— when asked about Tilera

“In a hidden valley, northwest of the Plains of Erathell, the ruins of Urul-Tusk lie undisturbed, as they have for many centuries. What Tilera wants there is beyond me, but I trust her. Even if it goes against my better judgment.”

“We are the charmed, the subtle, and the inspired. In happier days, we were the loftiest of the mortal races. We despise open war. But for decades, the Tuatha have been at war with us, pushing into our lands and forcing us to take up arms.”

— when asked about the Dokkalfar

“For a long time they were content to keep to their play of the Summer and Winter courts. Now we fight Gadflow and the Tuatha for our very existence.”

— when asked about the Fae

“A close friend once told me, "Strive to be whatever you want to be. Fate might be a lie, but if it isn't, then worrying about it won't change a thing."”

— when asked about Fate

“None of us could have foreseen the rise of Gadflow and his army. But we should have, and now we're all facing the price.”

“Nyralim is the oldest living mortal. He remembers the time before even the Fae called these lands home. You should see how they cherish him. He rarely grants an audience to visitors. His tenders say he knows the future as well as the past. It makes him very particular about what he says.”

“We've known for a long time that prismere crystals allow us to store and focus magical power. The gnomes use it in their grander inventions, when they can get it. But we have no idea how Gadflow got a hold of so much of it. It makes his Tuatha the most dangerous army I've ever seen.”

“The Summer Court, or the Seelie Fae if you prefer, embody the growth and energy of nature. But they can still be as aloof and uncaring as a brutal summer day. The current High King of the Fae is Titarion, the wisest of the Summer Court. While Gadflow has undermined the Winter Court, he tries to keep their cycle in balance.”

— when asked about the Summer Court

“You haven't been around much, have you? The Tuatha have been pressing west from their home in Alabastra. Right now, they're only threatening my people, but if we fall, the Tuatha will turn their eyes to the other mortal races.”

— when asked about The War

“Titarion isn't quite what you'd expect from the High King of Summer. But he hasn't got the arrogance of his cousins. Or their cheer. Ever since Gadflow killed the High King of Winter and started the war, Titarion has become distant and melancholy -- and blind to the dangers around him.”

“The Tuatha are a radical sect of Fae within the Winter Court. Led by Gadflow and his insane rants about their new god, they've taken power and declared war on mortals. They use raw prismere to enhance their power, and their devotion borders on madness. But the most terrifying thing to the Fae is simply the fact that their siblings have changed so completely.”

— when asked about the Tuatha

“The Winter Court, or the Unseelie, embrace the destruction and decay of nature. They aren't evil, but they aren't exactly the best of friends. Normally they share power peacefully with the Summer Court, but since the Tuatha have seized power, there is neither peace nor predictability.”

— when asked about the Winter Court

“The Gardens of Ysa, home of the Summer Fae, once spread from the forests of Dalentarth, across the plains of Erathell, and even through the deserts of Detyre. Between the madness of the war and the spread of man, Alfar, and gnome, the Summer Fae lose a little more ground every day. A tragedy... for them.”

— when asked about Ysa 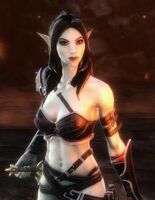 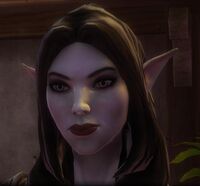 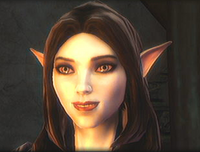