This article is a stub. You can help Amalur Wiki by expanding it.

I was a soldier once, in the years before the Crystal War. I saw many die at Galafor Fields. You could say I learned my lesson.

He can be found at the Blue Bear Tavern in Emaire, within the Cradle of Summer.

“Bother me later, if you can wait that long. I'm not selling right now. Too busy.”

“I am on official business. Unless you've been sent by the Alfar army, we have no reason to speak.”

— upon your first encounter.

“I'm here as a recruiter for the Alfar army. My superiors believe there's still fresh blood to be wrung from the Forsaken Plain. They're wrong, of course.”

“Let's just say that I'm glad I'm not one of them. War is harsh on many people in many ways. Those of us who can avoid the suffering should.”

— when asked about the Refugees.

“Ask anyone and you'll get the same answer. They're animals. They care nothing for the mortal races. We're just dust to them.”

— when asked: Tell me about the Tuatha.

“Enough! Keep your voice down. You're right. You're right. I'm a scoundrel and a coward, but you would have done the same thing. Give me a chance to make it right. You have my word, as a father. My informing days are over.”

— if chosen the response: Admit you're a spy or die (succeeding in persuasion attempt). 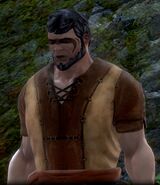 Add a photo to this gallery
Retrieved from "https://amalur.fandom.com/wiki/Anred_Amfast?oldid=69235"
Community content is available under CC-BY-SA unless otherwise noted.