“Go into a berserker rage, dealing greater and greater amounts of damage with each enemy you defeat in a short time.”

Battle Frenzy is a Might-based ability. The character is put into a berserker rage for a short period of time, dealing greater amounts of damage with each enemy defeated.

There are 5 levels of Battle Frenzy, with two more available via ability bonuses. Note that the first kill grants 10% bonus damage, then the second kill grants 20% bonus damage; further bonuses are unlocked according to the table below. Also note that each kill resets the bonus's duration. Battle Frenzy has a sustained mana cost equal to 30% of your maximum Mana. 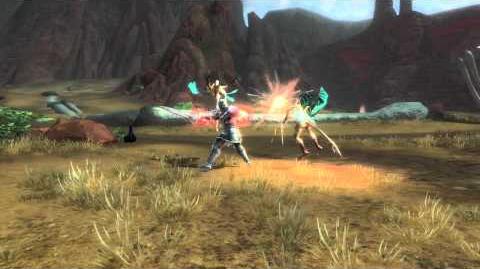 Retrieved from "https://amalur.fandom.com/wiki/Battle_Frenzy?oldid=62199"
Community content is available under CC-BY-SA unless otherwise noted.