Start a Wiki
Crystalline Barrier is an armor piece in Kingdoms of Amalur: Reckoning.

This massive shield, carved from a single crystal from the eastern hills of Klurikon, looks fragile, but is reinforced by powerful sorceries. 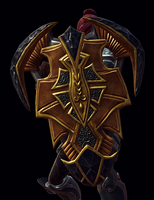 In-game model
Add a photo to this gallery
Retrieved from "https://amalur.fandom.com/wiki/Crystalline_Barrier?oldid=67349"
Community content is available under CC-BY-SA unless otherwise noted.