Daggers are a type of melee weapon available to the Fateless One in Kingdoms of Amalur: Reckoning. Using rapid focused attacks, the daggers are a close-range weapon, good at disrupting smaller enemies with a flurry of attacks and assassinating unaware enemies from stealth with a single devastating attack. Being part of the Finesse-based weapon set, they are intended for use by rogue-style characters, and are bolstered by the Precise Weaponry, Dagger Mastery, and Assassin's Art passives in the Finesse ability tree.

Daggers will always have a base damage consisting of Physical Damage and Piercing Damage, with approximately a 50/50 split ratio.

They have a Very Fast attack speed, making them the fastest weapon type in Amalur.

They have the Most combat moves available for those who invest fully in the Precise Weaponry and Assassin's Art abilities, equal to the number available to Faeblades and Longswords.

They have the Lowest damage output per hit of all melee weapons, but this is offset by their moveset versatility, attack speed, and unique Backstab ability (unlocked by investing in the Assassin's Art ability).

Other abilities not specific solely to the Dagger, such as Blade Honing and Envenomed Edge, can also be applied to increase damage delivered. 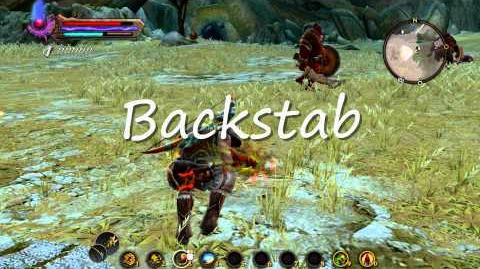 The Fateless One can craft daggers at any Blacksmithing Forge by using some small blades and a hilt; rivets and bindings are optional components. With sufficient skill, mastercrafted daggers that offer a bonus percentage to total damage can be created.

The Fateless One can also disassemble existing daggers for salvage, recovering some of the above-mentioned components.

Retrieved from "https://amalur.fandom.com/wiki/Daggers?oldid=65110"
Community content is available under CC-BY-SA unless otherwise noted.