Edit
watch 02:58
No Man's Sky Update - The Loop
Do you like this video?
Play Sound

Fatesworn is an exclusive expansion for Kingdoms of Amalur: Re-Reckoning, included with the Fate Edition. It adds approximately 8+ hours of gameplay and picks up where the original campaign ends.

Fatesworn introduces a number of new items that players can collect including weapons, armor, accessories, and consumables. Similarly to other DLC expansions such as The Legend of Dead Kel and Teeth of Naros these items feature level-based stats, meaning that the item's base stats (I.e. armor, damage, effects, etc.) and requirements are generated based upon the Fateless One's experience level when the item is acquired.

Fatesworn introduces a number of new types of creatures and enemies that bring new challenges to the player throughout the land of Mithros and the Chaos Rifts that open new paths to the Chaos Realms of Esharra.

Travel the paths that wind through the mountainous region of Mithros to discover new locations both in this world and the realm of magic that exists beyond. 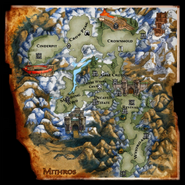