Start a Wiki
Fury is an armor piece in The Legend of Dead Kel DLC.

The Dverga believe there is no stronger barrier than a sea at storm. This talisman channels the energy of a stormy sea into a shape that protects the wielder from every harm. 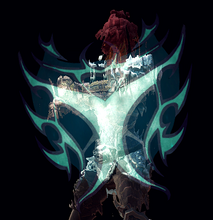 In-game model
Add a photo to this gallery
Retrieved from "https://amalur.fandom.com/wiki/Fury?oldid=66907"
Community content is available under CC-BY-SA unless otherwise noted.