General Tilera is an NPC in Kingdoms of Amalur: Reckoning.

Ten years ago, I served the Alfar armies, defending Klurikon and Mel Senshir from the Tuatha armies. Then Witch Knight Malwyn led his Tuatha summoners agains us. The fiends routed my soldiers at every turn. Now they've had Mel Senshir under siege for years, while I've been searching for a weapon to turn the tide.

When the Tuatha marched on the Plains of Erathell without warning 12 years ago, the Alfar hastily organized an army under the command of General Tilera ap Gwydion to strike back against the assault. Although the campaign was costly, Tilera eventually drove the enemy out of Erathell and back into the swamps of Klurikon.

But the war was not over. Tilera’s loss following the appearance of the monstrous Balor on the Day of the Pale Swans allowed the Tuatha to push back and lay siege to the fortress of Mel Senshir. And there the battle lines of war have stood for the past nine years.

Tilera, ashamed of her failure even in the face of such hopeless odds, resigned her commission and set out on a journey to uncover an ancient weapon that legends say can kill the Balor. Tilera knows that it is only a matter of time before the Tuatha call the Balor to the walls of Mel Senshir, turn the tide of the battle in their favor, and sweep across the Faelands once again.

In memory of her heroics and successful return to Mel Senshir after many years of exile, Commander Owaiglyn vowed to rebuild the walls of Mel Senshir and rename them after General Tilera, so that her name would never be forgotten. Alternately, if the Fateless One tells Owaiglyn that Tilera had run from the battle, Owaiglyn will state that Tilera was merely a coward, though not all will share the negative opinion; Ragna Senn and Bronwen Senn, for example, will retain their belief in Tilera's courage.

After the Fateless One defeated Tirnoch and was brought back to Rathir, he/she was given Tilera's room.

“Hail. I am General Tilera ap Gwydion, former commander of the Eastern Alfar forces. Surely you're not the aid Alyn Shir promised. She spoke as if she planned to send a whole squad of soldiers, not one faceless mercenary.”

— upon your first encounter with her.

“You have the bearing of one that's seen combat... but you never fought in the war, or you would know who I am. Once, I was the commander of Mel Senshir, the Alfar fortress to the East. I held back the Tuatha at every push, before the Balor came. Then, everything fell to pieces.”

“So... she is behind this. That woman! One too many time she's meddled in my affairs, making promises she never intends to keep. Well, perhaps it's for the best. The fewer people involved in my affairs the better. You see, misfortune follows closely at my heels. It is the lot fate has cast for me.”

— if chosen the response: Alyn sent me to help.

“The years have been long since I first learned of the means that might deliver Mel Senshir from the Tuatha. It lies it Urul-Tusk, beyond a gate fated never to be opened, in a hall awash with Niskaru. Any who seek access to the ruin must face them.”

— upon your response: Trust me, I can help.

“These ruins are said to be the resting place of the Piercing Light, a spear carved from the tusk of the Niskaru duke, Gajaor. The legends say it destroys any horror - in the mind or on the battlefield. No place is more deserving of such a power as Mel Senshir.”

— when aksed: How will this help the war?

“The ruin holds the only weapon know that can slay a Niskaru Lord, and the monsters inside will do anything to keep it safe. The Erathi sealed Urul-Tusk, to be opened only when "the great voices rise in song." This may refer to the Windstones scattered across the Plains, but I can't be sure. Years ago this chime was found near the ruin. I've tried using it to make the Windstones sing, but I've had no luck. As if that's a surprise.... ”

— when asked: Why do the Niskaru care?

“We may be lofty, but we are not weak. Our land is cold and harsh and we have long studied the noble arts of bow and blade. Across a thousand batllefields, my spear pains a red masterpiece.”

— when asked about the Ljosalfar.

“Mel Senshir is the gateway into Klurikon, but it's been under siege ever since my defeat. I failed the city once; I can't fail them again.”

— when asked about Mel Senshir.

“The Balor is a thing of dread. A Niskaru Lord that the Tuatha managed to coerce into fighting on their behalf. Against the Tuatha, I had some success. But no ordinary weapon can best the Balor. One must fight darkness with light.”

— when asked about the Niskaru Lord, Balor.

“With Tuatha raiding parties along the shores, Rathir has the only port for safe passage across the strait. But after assisting Mel Senshir for so many years, the ruling council of Rathir is loathe to offer more aid for what they see as a lost cause.”

“Urul-Tusk, the tomb of the divine fang, the Piercing Light. With a weapon like that, I could rally the troops at Mel Senshir... and perhaps redeem myself. They say the ruin is guarded by legions of Niskaru, led by a beast known as Azaghaal. Wether this is true - or the stuff of legend - I don't know.”

“Long after the Erathi left our world, the mortals build these Windstones to call them back down. I've never seen them work - but as I said before. I'm not known for my good fortune.”

— when asked about the Windstones.

During the quest "The Great General"[edit | edit source]

“The inscription says the gate will open "When the great voices rise in song." I think this means the Windstones that are spread across Erathell. There's one just a little to the south. Go there and strike this chime near it, I'll stay here to see if it has any effect.”

— when asked: How do we open this gate?

Once you've rung the first Windstone:

“I... I can't believe it. The gate shifted!? For all my efforts, you simply appear and make it respond.”

“No. You've opened one part of the gate, but four more remain. You must find the Windstones scattered throughout the Plains, and activate them. I will remain here. The Niskaru will sense that the seal is weakened. Someone must try to hold them back.”

— when asked: Can we enter Urul-Tusk yet?

“No one could. Not even Fateweavers. They say that fate has woven no thread to open these doors... and yet, you've done it. But we must not stop here, not when good fortune smiles upon us. The gate opens, but you must find the remaining Windstones and strike the chimes. I will remain here. The Niskaru will sense that the seal is weakened. Someone must try to hold them back.”

— when asked: You couldn't do that yourself?

“I'll stay here and fight any Niskaru looking to sneak past us.”

Once you go after the Piercing Light:

“You've done it... The ancient Erathi sealed this place centuries ago... and it opens to welcome you. Incredible.”

— upon return to Urul-Tusk after ringing the fifth Windstone

“The Piercing Light should be in the deepest vault of these ruins. Be careful. The Niskaru will do anything to keep us from that spear.”

— when asked: Where are we going?

“Be careful. I have seen too many allies die to lose another.”

“The Niskaru took everything from me. My soldiers, my station... everything. All my life burned when Balor rose over the fields of battle. These Niskaru... they were not always in the war. It wasn't until the Witch Knight Malwyn started making pacts with them that they fought alongside the Tuatha.” 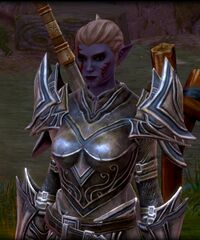 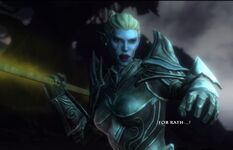 General Tilera mortally wounded
Add a photo to this gallery
Retrieved from "https://amalur.fandom.com/wiki/General_Tilera?oldid=77146"
Community content is available under CC-BY-SA unless otherwise noted.