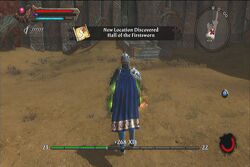 Found in Menetyre, this location is found in Detyre. The location is visited towards the end of the Warsworn questline, after retrieving the Mystic Hammer remains from Eagonn's Tomb.

You can visit the site earlier than this, however there is a fateshift door that prevents you from travelling through the dungeon fully.

While visiting the tomb with Gwyn Anwy, she reveals upon entering that it was here her mother travelled to before disappearing.  Her (mother's)  body is found in front of the sealed fateshift door.

It is also here that the Warsworn questline is finished, with the Fateless One being awarded the title of Truesworn, an honour only one or two people receive in a lifetime (this presumably means every 100 years or so).

The following reagents can be harvested here:

“Legend tells it is there that Eamonn was transformed from a prince to the First of the Warsworn. It became a meeting place of sorts, in the time of the Firstsworn.”