Jottun is a Non-playable race in Kingdoms of Amalur: Reckoning.

Jottuns are a giant enemy type that are encountered in Kingdoms of Amalur: Reckoning. Jottuns mostly use hammer type weapons and are able to deal huge amounts of damage if the player is not careful in utilizing blocks and/or evasions.

Jottuns are large, brown-skinned giant-like enemies who generally wield large hammers. Roughly 3 meters tall, Jottuns are stocky, with short legs and pot bellies. Though it's difficult to see, Jottun also have long hair which they keep in a ponytail and two boar-like tusks. Jottuns are implied to be intelligent and have a language - the Varani are said to have received their name from the Jottun word meaning "traveler" - but most noises from Jottuns in-game are grunts and laughs.

There are four different classes of Jottun:

Like Trolls, Jottun are large enemies with large amounts of health who can deal heavy damage but are very slow. Jottuns also possess a charge attack, but it is much slower than that of a Troll. However, Jottun charge attacks can change direction and they are capable of following the player while charging. A Jottun will only stop charging after they pass the player.

All Jottun except Runelords have no ranged attacks and rely on their charge attack to close the distance. In melee range, Warriors and Chieftains attack by smashing their hammers on the ground in front of them, dealing heavy damage. Runewielders and Runelords swing their hammers around them, potentially hitting the player twice. If the player stays too close, Jottuns will push the player back with a bellyslam, dealing minor damage. Runelords have a fairly powerful medium-range spell that deals Ice damage; Runelords will stomp on the ground and summon a large ball of ice, which they will hit towards the player with their hammer.

Jottuns are dangerous enemies due to the fact that they almost always appear in groups of at least two and all Jottun attacks can cause the player to stagger, even through a shield, allowing another attack in quick succession to hit the player directly. Jottun can also attack while they are being attacked, stopping weapon combos.

Abilities that can stun are very useful against Jottuns, as it will prevent them from interrupting your weapon combos. It is also recommended to dodge rather than block, as the stagger after blocking may open you up to further attacks. Medium and long-range weapons or spells are particularly useful against Jottun since most of them can only attack in melee range. For melee users, try to dash in, deal fast, hard-hitting attacks, then dodge away before they can catch you with a stagger.

A Jötunn is a godlike giant in Scandinavian mythology. 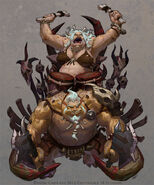 Jottun as they were to appear in Project Copernicus
Add a photo to this gallery
Retrieved from "https://amalur.fandom.com/wiki/Jottun?oldid=74646"
Community content is available under CC-BY-SA unless otherwise noted.