A proud and insular people, the Ljosalfar strive to preserve nature and shape it to their will. The light elves resist change, flash-freezing their ancient homeland to keep it in an idealized, timeless state. The Ljosalfar revere the principle of Justice, fighting time and again to defend Amalur against chaos and darkness.

The light elves stand with their Dokkalfar cousins to battle the relentless armies of the Tuatha. Though far from their frozen homeland, the Ljosalfar are determined to keep the fortress of Mel Senshir from falling into the hands of their enemy.

“We must steadfastly preserve all that we hold dear, for an unstable world fosters uncivil times.”

— Berrion Callan, reciting funeral rites at the burial of his only son

The Ljosalfar are proud and ancient people from the frozen lands of the north. Ljosalfar judge themselves fit to divine right from wrong under wind, sun, and sky, and mete an even-handed justice.

The power among the Ljosalfar political elite is shared between three groups: the elected advisers, who control the external-facing political and military organizations; the monarch, who rules over internal affairs; and the Scion, who serves as leader of the Justicars. Among the kingdoms of Amalur, the Justicars are the most potent symbol of the light elves' influence upon the world.

Upholding stringent vows of absolute impartiality, the Justicars are often called upon to act as traveling judges in situations where a third party is needed to settle disputes. Members of all the great kingdoms respect the judgments of the Justicars due to their proven commitment to fairness. The Scion, a female child of the royal line, concludes her training by peering into the Light of Justice. Blinded by its brilliance, she shrouds her eyes for the rest of her life, lest they reveal the sacred truths she is charged to protect.

Ljosalfar may not be known as creatures of comfort, but more than a few hungry, half-frozen travelers have recovered from frostbite after a few sips of their sickletusk boar stew. In times of war, the light elves have proven valuable allies to members of the Concordance: the courageous elves are renowned for their skill in battle, relying on their preternatural speed and grace to vanquish their enemies.

Compared to the more populous humans, the Ljosalfar are few in number and sustain their economy with limited trade. Elven hunters and trappers sell exotic furs to the high society of the great kingdoms, securing a comfortable profit while ensuring that the animal world maintains a healthy balance. Along with the fauns with whom they share their vale, some elves have become known for their winter wines, vintages sought after as much for their rarity as for their distinctive flavor.

As with their dark elf cousins, the Ljosalfar are more closely tied to magic than any of the other mortal races. Magic is inherent to the light elves, as much a part of their culture and society as the snowy landscape they call home. Even in Amalur's earliest history, they were able to channel powerful magic far before other races felt the allure of its auspices. Though other races would gain a similar level of control over arcane forces, the Ljosalfar continue to be renowned as teachers of the mystic arts.

Ljosalfar most commonly worship the Patron Gods Driana and Lyria, with beliefs that tend toward the veneration of nature and magic. With their homeland's firmament held in eternal twilight, the elves give equal reverence to both Helius and Lunala, the gods of sun and moon. They believe fully in justice and order, and they are willing to shape Amalur to match those ideals. These beliefs put them in conflict with those who believe that nature should remain whole and untouched, such as the more militant wild elves, the Hironar.

Driana, goddess of nature and weather, is both a source of life and a force of destruction. Lyria, goddess of magic, provides the Ljosalfar with the vitality to mold the blessings of Driana to suit their goals. In their unyielding dedication to justice, they never withhold judgment of wrongful conduct.

When the the Deep Gloam receded and mortal races finally emerged from their hiding places, the Alfar were among the first to venture forth. But the lands their ancestors had spoken of had become a frozen wasteland, vastly different from the days before the Gloam. Harsh winters thinned their numbers, and they decided to journey south in search of a more hospitable climate.

The elves braved the Perilous Straits, an icy channel that claimed many of their watercraft and even more of their lives. They established a new home in the cold, northern region they called "Eldrith", in a secluded valley they named Glen Suthain. There, during the time of the Emergence, the elves became allies of the Mitharans—humans who served the magical Erathi in the Empire of Erathell.

United by a common ancestry, the Ljosalfar and their charismatic cousins, the Dokkalfar, coexisted for many centuries. As they watched the humans and other races build their fragile civilizations, the elves celebrated the abiding kinship that transcended minor differences in philosophy. While the dark elves embraced change, the light elves believed that any system of codes devised by the celestial beings of order would be a perfect manifestation of law.

When the Erathi presented the mortal kingdoms with the Codex of Order, the Ljosalfar fervently adopted the principles of the magical beings while the dark elves retained their more malleable ethos. After the Erathi departed and Mitharan unity crumbled, the Ljosalfar recovered a piece of the fragmented codex and placed it among their most valuable artifacts.

The elves, especially the Ljosalfar, came to love and appreciate the cold, beautiful lands that surrounded them. With every passing year, the light elves utilized their powerful magic to maintain the ice-covered landscape of Glen Suthain, preventing it from thawing to keep it in an ideal state. To their eyes, their home embodied perfect order: a beacon of truth in a world ravaged by deception.

War and a Parting[edit | edit source]

During the era of the Early Kingdoms, many human settlements in Alfaria were conquered by a warlike tribe called the Durek. After some smaller-scale skirmishes, the Durek staged a surprise attack that resulted in the death of the heir to the Ljosalfar throne.

The elves—decisive and merciless when provoked—wiped out entire legions of the Durek in response. The dark elves were particularly vengeful, relentlessly cutting down their human adversaries to the brink of extermination.

The Justicars, ruling that the aggression of the Durek had been repaid, decreed that the war must end before further bloodshed blemished the integrity of the elves. This ruling, accepted as law by the Ljosalfar, was vehemently protested by the Dokkalfar. This philosophical schism between the two elven races became too great, and they realized that, in order to preserve their familial bond, the kinsmen would need to live apart. The dark elves would look beyond the Eternal Vale for a home of their own.

Masters of the Arcane[edit | edit source]

Their confidence unshaken by the departure of the dark elves, the Ljosalfar forged new alliances in the Age of Arcana, a time when magic began to flourish in Amalur. As a race that had a longstanding mastery of the arcane arts, the Ljosalfar taught friendly nations the techniques necessary to harness the sudden prevalence of magic, building a settlement called Tolyndrae in the land called Laran. Founded as a fulcrum of knowledge and learning, Tolyndrae cemented the light elves' role as arbiters of arcane study.

Training other races to use magic changed from a political benefit into a military necessity when the Faelands erupted into war. Allied with the dark elves, the Crystal War lasted for more than a decade, with the relentless attack of the Tuatha Deohn taking an ever-greater toll. The Ljosalfar sought a peaceful resolution to the conflict, but lust for power and the words of the Tuatha god had driven the Fae mad.

Following the Crystal War, the two elven kingdoms continued their journey down separate paths. As the forces of chaos swarmed across Amalur in the Age of Ruin, Tolyndrae fell and the Ljosalfar retreated to Glen Suthain. The loss of numerous mages and countless artifacts set magical research back hundreds of years, and the light elves endured the rest of the age in mournful seclusion.

The Kollossae rekindled the hearts of the Ljosalfar when, determined to drive back the darkness, they struck out from Idylla and marched to Eldrith. Together, the elves and giants liberated the besieged Almain, restoring order to Alfaria and the rest of Amalur under the banner of a new alliance: the Concordance. Thus began the Age of Enlightenment.

Rejuvenated, the Ljosalfar sought to repay the efforts of the Massariol, halflings who proved fearless comrades in the defense of Eldrith. Refugees from a decimated land, the halflings had fought and died alongside their elven allies. In 103 AE (3379 NW), the Ljosalfar formally granted stewardship of the forests and grasslands of Tirna Nogth to the Massariol, which they renamed Vino Terra.

The burgeoning might the Concordance signaled a permanent shift in roles among the kingdoms of the west. The kingdoms that had once lacked control of magic now influenced the world as much as the elves.

The Ljosalfar, having restored their honor, decided to take a less visible role in Amalur's political culture. They relied on their close allies, the Massariol, to maintain economic ties with the rest of Amalur, while they happily let the Almain take a more visible role in world affairs.

As the Age of Heroes blossomed, the Ljosalfar preferred to stay within the borders of Glen Suthain while the other kingdoms struggled for primacy. Instead, the light elves ruminated on a greater concern: the rapidly rising level of magic in the world. 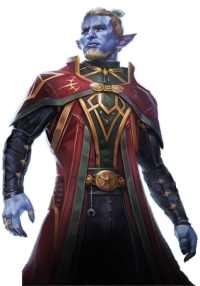 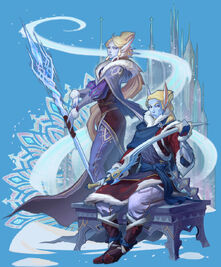 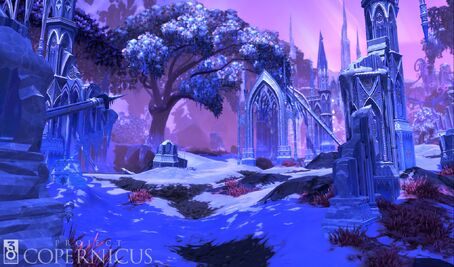 A landscape in Glen Suthain 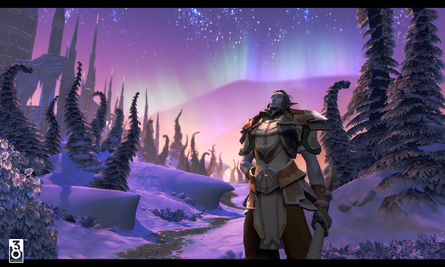 Ljosalfar as they were to appear in Project Copernicus
Add a photo to this gallery
Retrieved from "https://amalur.fandom.com/wiki/Ljosalfar?oldid=76527"
Community content is available under CC-BY-SA unless otherwise noted.