Niskaru Tyrants are seen across the Warsworn storyline and seen in the main storyline.

Niskaru Tyrants are the second strongest Niskaru class, with the strongest being a Niskaru Lord, they are much stronger than the lower-class Niskaru with their ability to muster fire and spells.

Most Niskaru Tyrants are resistant to fire-based attacks and vulnerable to ice-based attacks. However few Tyrants wield elemental ice and are therefore weak to fire. An example of this is the Niskaru Horrinox who appears several times in the game though a Horrinox does not always follow this example. The Horrinox in the Valor challenges throws fire and is indeed immune to fire and weak to ice, despite being a Horrinox.

Niskaru Tyrants are very dangerous enemies especially if encountered early in the game, if you chose to pursue the Warsworn questline as soon as possible, far outclassing smaller Niskaru in terms of damage and health.

Fighting a Niskaru Tyrant from afar will require attention as he is as dangerous with his ranged attack as he is within melee range. Pay close attention when he charges and be ready to dodge at all times.

Might and Finesse characters should use Ice weapons to lessen the difficulty of the battle. Dodging after 2-3 attacks is crucial to avoid getting hit, be particularly mindful of the Fire Outburst attack as it can deal a large amount of damage also inflicting the Burning ailment. 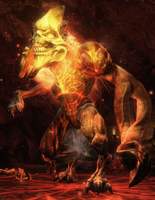 A Niskaru Tyrant
Add a photo to this gallery
Retrieved from "https://amalur.fandom.com/wiki/Niskaru_Tyrant?oldid=78523"
Community content is available under CC-BY-SA unless otherwise noted.