Rathir is a location in Kingdoms of Amalur: Reckoning.

This article is a stub. You can help Amalur Wiki by expanding it.

The majestic city of the Dokkalfar has stood for over a thousand years. Founded upon a spire of stone jutting out over the waters of the eastern coastline, the Dokkalfar have built Rathir into a center of trade and commerce. Like the Dokkalfar themselves, the city resonates with great magic, resplendent beauty, and hidden currents of power.

Located in Rathir is the main chapter of the Scholia Arcana, and the only port capable of ferrying troops over to Klurikon.

The following NPCs can be found here:

The following services are available here:

Historical Markers are black stone plaques found across the city of Rathir that detail different events in the city's founding and pivotal moments in its history. Monument: Plaguetimes & First Burning

“... Plaguetimes came to an end with the Burning ... fires that swept over ... somehow took the disease with them ... this time that the Orbocant was established to ensure ... nor ... would trouble Rathir ever after.”

— found in the Quays

“Thirty-seven years after a flock of pilgrims set root upon the spire-rock and named it Rathir, Fate cut High Priestess Bayala Tirin free from the world of the living. The first tree in the city was planted on this spot, in memory of our loss and the gifts she had given us.”

— found by the tree left of the entrance to Rathir city

“It was here that the Second Burning (Llosgiad) took place. In darkest night the Enemy breached our defenses and stormed these piers with fire and discord. Due to the valiant work of our Watch and Mages, they were repelled and cast back into the churning waters of the Strait.”

— found just by the Burn docks

“Not a finer city in Amalur.”

“Varani men have such rude eyes.”

“The captain of the watch, corrupt, and murdered?”

— after completing Every Sparrow Fallen

“These Alfar women, bewitching is what they are!”

“Only warships dock at the Burn. All others must go to the Quays.”

“They say old Abergast's dead and stranger things, too -- if you believe them.”

“So many of our young men and women, lost to this war.”

“All who love Lyria should seek the Orison at the Temple. It's like nothing else I've known.”

“The last warship sailed yesterday. Trumpets blazing, and all those soldiers on deck.”

“It's common knowledge; Eames killed a man in a duel! They say he's left the city.”

— after completing A Second to a Duel

“Every morning, fresh soldiers board warships on the Burn. Every night, the dead and wounded are carried from the ships.”

“Anything, everything, is bought and sold in the Pryderi market.”

“In search of a game of Hexes? You want Kest, in the Lower Tunnels.”

“All we haul ashore must pass the Chamber of Trade. Bribes won't do you a bit of good, either.”

“Docked in Rathir today. A drink, some cheer, a hot meal, then on the waves tomorrow morn.”

“That garden in the temple, spire-top; it's always night! Got to see it with your own eyes!”

“Captain Talibor -- a slaver and murderer? I don't know what to think, anymore.”

— after completing Every Sparrow Fallen 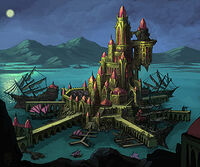 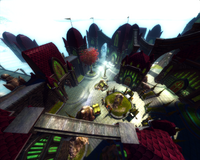 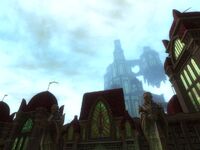 The beautiful city of Rathir! 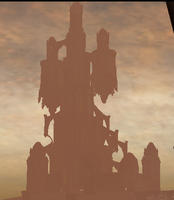 View of Rathir from the strait

The beautiful city of Rathir! (High resolution)
Add a photo to this gallery
Retrieved from "https://amalur.fandom.com/wiki/Rathir?oldid=78833"
Community content is available under CC-BY-SA unless otherwise noted.