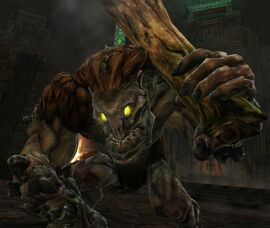 Rock Trolls are a sub-species of Troll. The first boss-like enemy encountered in the game is a Rock Troll, which is fought during the quest Out of the Darkness when the player is escaping from the crumbling cavern that housed the Well of Souls. There the player will meet the troll with two Tuatha Deohn soldiers. Rock Trolls are found in several areas and usually travel alone.

Rock Trolls use both melee and ranged attacks. You can dodge melee attacks because of their general slow speed. They can also be blocked, but will still do a decent amount of damage. When launching his ranged attack, he will lift his club vertically and smash it on the ground, throwing several projectiles. These are more difficult to dodge, so it is best to block these attacks. After each attack, the Rock Troll pauses before attacking again, leaving a window for you to take down a good chunk of its health.

Rock Trolls, as all types of Trolls, have a chance of dropping Unique or Set items when killed. Note that their loot is rolled when they're killed, not when they spawn in, allowing you to save before killing one in order to farm said pieces.

Retrieved from "https://amalur.fandom.com/wiki/Rock_Troll?oldid=73276"
Community content is available under CC-BY-SA unless otherwise noted.