First we have an army of Jottun at our gates, and now this. I don't know you, little one. But you'll find no quarter here.

Secandra is the Captain of the Guard of the floating Kollossae city of Idylla. She is the very first Kollossae the Fateless One encounters after entering the Teeth of Naros. She initially shows a great distrust of the little being at first, due to the Jottun's genocidal attacks against her people. But after talking for a bit, she realizes that he/she had come through the formerly sealed passages that the Kollossae once were digging and building towards Dalentarth, but stopped by their gods. When she inquires about the mysterious voice, and is shown the Cipher of Ethene, they are attacked.

After a group of Jottun attack, she shows surprise that a being so small could be so strong in battle, and asks the Fateless One to go meet a scout of the guard before going to kill the Jottun leader, Warlord Kahrunk, promising to take him/her to the Primos should the warlord fall. After the fall of the Jottun warlord, she is amazed and has come to believe that the Fateless One is really the legendary being told in Kollossae myths known as the Beckoned.

First met outside the Southern Passage in the Teeth of Naros.

According to Remes, Secandra has worked tirelessly without pause since taking command of the Idylla city guard. 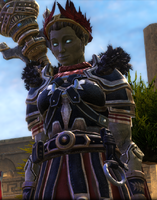 Secandra after becoming Primos
Add a photo to this gallery
Retrieved from "https://amalur.fandom.com/wiki/Secandra?oldid=77096"
Community content is available under CC-BY-SA unless otherwise noted.