“Throw down a smokescreen to stun enemies and blind them to your presence for a short duration.”

Smoke Bomb is a Finesse-based ability where the character throws a smoke bomb that stuns and blinds enemies for a short period of time. When activating this skill, the character becomes invisible for 6 seconds.[n 1] The duration of the invisibility does not increase when leveling up. However, the stun duration of enemies affected does increase with each of the four levels of this ability.

The invisibility acts as a faux stealth, as such you can quickly sneak behind and attack as if from stealth. This can mean that the smoke bomb is a free assassination on one target.

The Travelers' quests are quite easy to complete with this ability. Simply use the ability, pickpocket or loot your target, then move away. Because you were undetectable when the theft occurred, you can get away scot-free.

There are 4 levels of this ability. One more may be unlocked via ability bonuses. Note that all levels have an explosion radius of 6 meters and a stealth duration of 6 seconds. 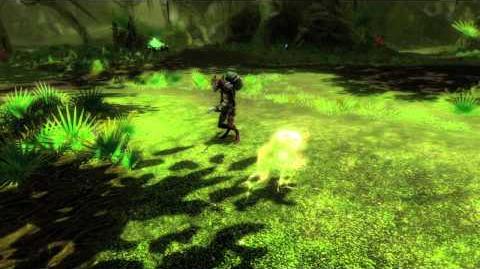 Retrieved from "https://amalur.fandom.com/wiki/Smoke_Bomb?oldid=62318"
Community content is available under CC-BY-SA unless otherwise noted.